On the morning of 9/9/2019, the author set out from his home to travel to the crash site.  Shortly thereafter, this shot presented itself (in hopes of being worthy of inclusion, no doubt!).  The Sun is shining through clouds, and a commercial jet is turning final for approach to Indianapolis International Airport’s runway 05.  The Allegheny crash site is 20 miles away, and lies to the Southeast – exactly the direction we are looking. 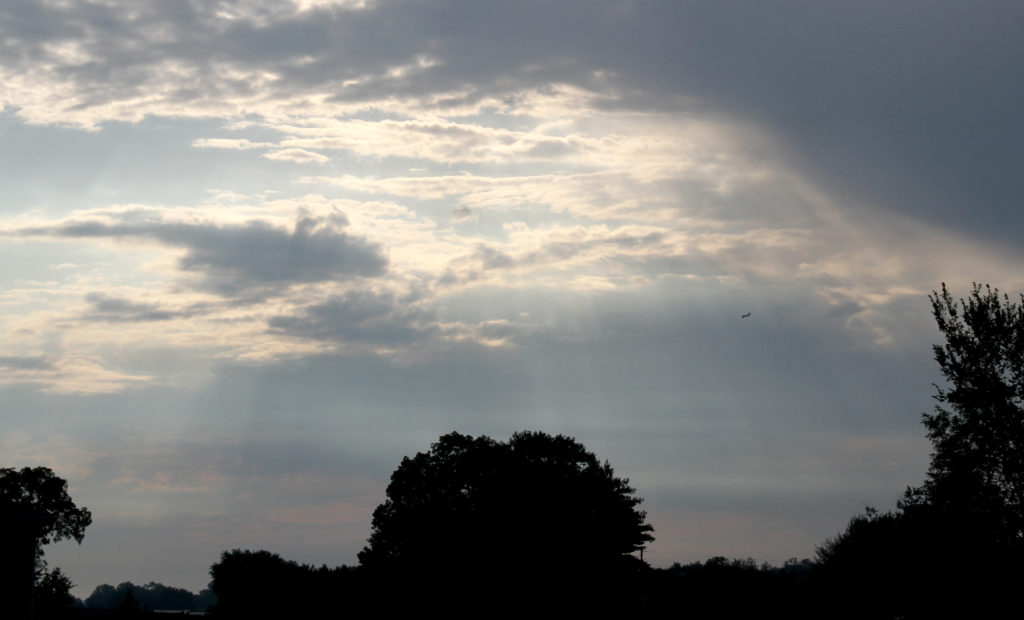 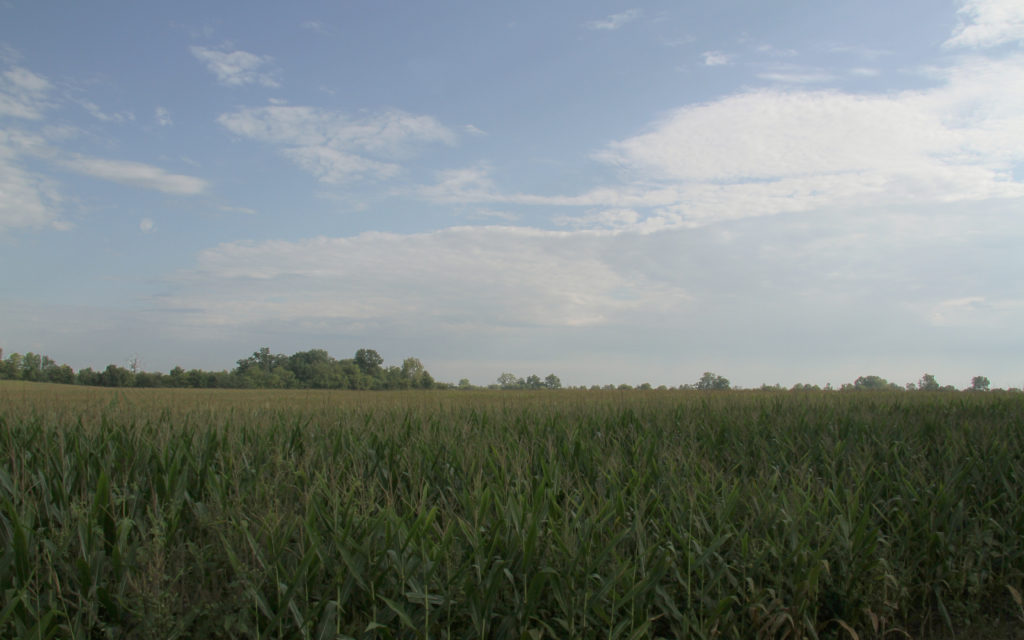 The crash site, from the main road in the mobile home park looking toward the northeast, about 90 minutes before the start of the service. The DC-9 crashed about halfway between our location and the stand of trees in the distance. 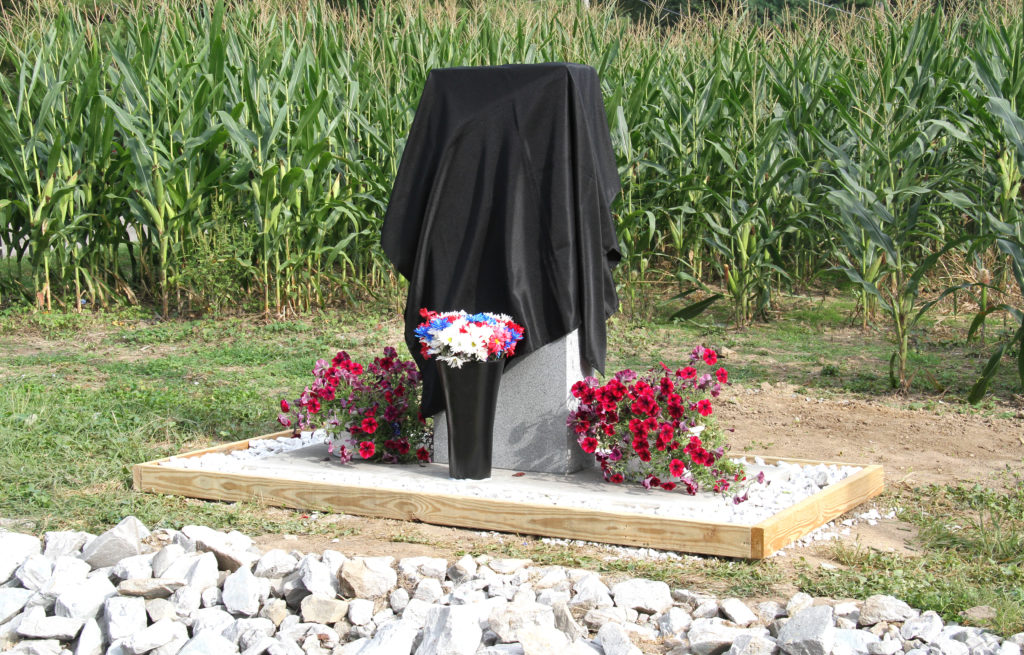 The newly-placed monument to the crash, draped in black in preparation for unveiling.  This monument stands on the far southwestern corner of the crash field, at the intersection of London Road and the mobile home park entrance road.  It is important to note that the field’s owner graciously donated the plot of land on which the memorial stands, and worked closely with the families to ensure that the location, presentation, and message would all be perfect. 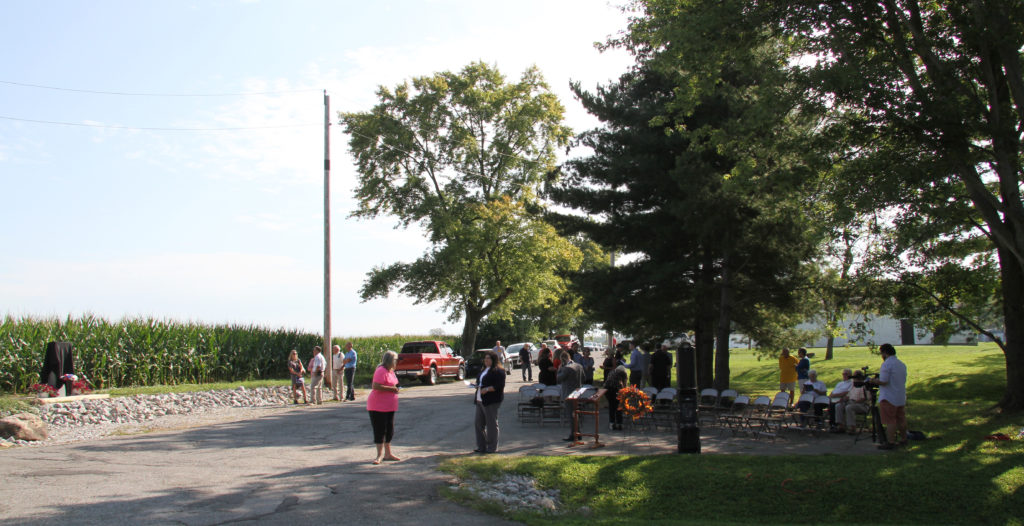 Looking northeast from London Road.  You can see the monument at left, and the setup that has been arranged to accommodate the attendees. 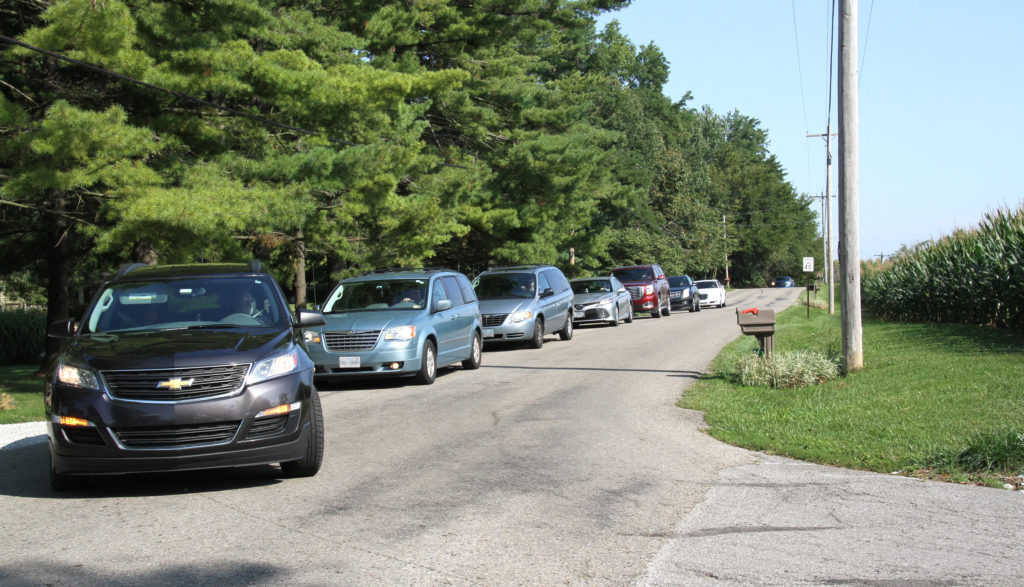 A police escort was provided from Shelbyville, for all attendees who did not want to try and navigate to the site on their own.  This is the end of the seemingly endless line of cars, as attendance was well above what anyone had expected.

Still 45 minutes prior to the start of the service, and the expected attendance was already exceeded. At least twice this number of people ultimately arrived; the chairs were completely full, and many rows of “standing room only” were stationed behind them. 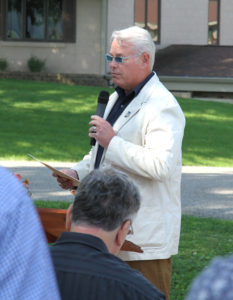 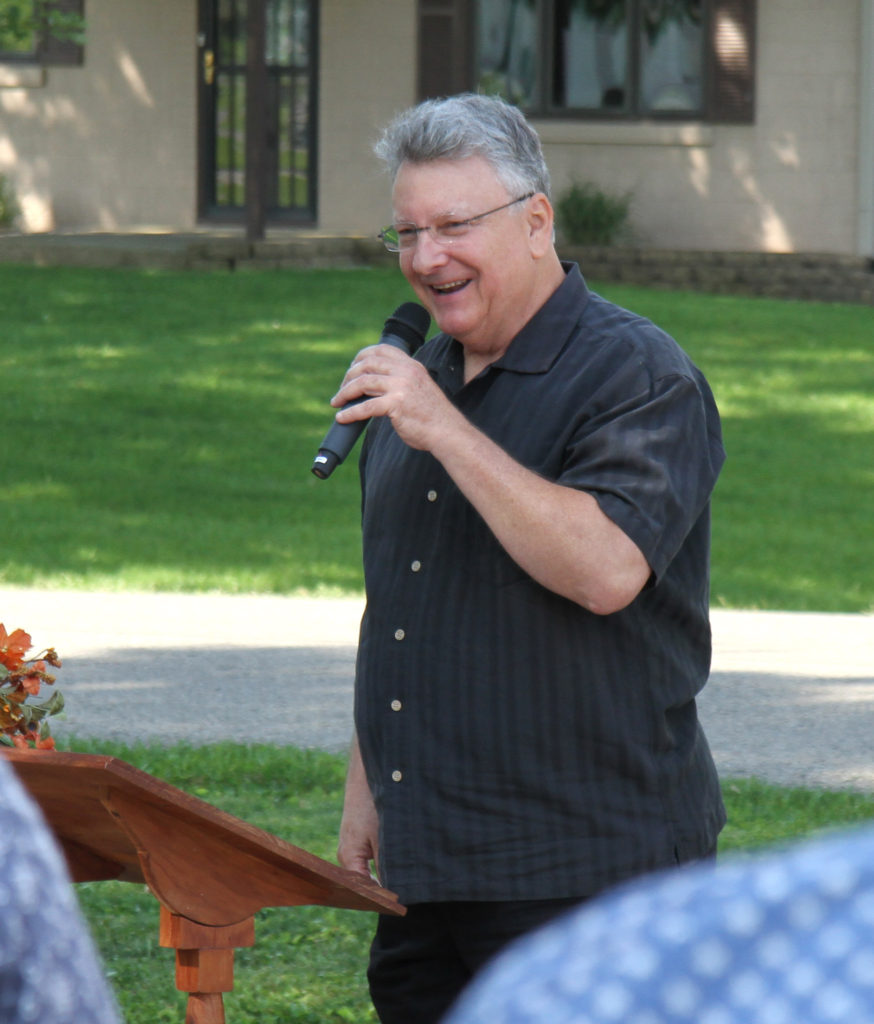 Later in the service, Mike Elrod (son of Allegheny 853 Captain James Elrod, and himself an 18-year veteran 747 Captain!) offered one of many very fond, positive memories of his father:

“My father … believed in doing the job right the first time.  He had a saying: ‘Be the labor big or small, do it well or not at all.’
But the ‘not at all’ part was never really an option with my dad, anyway….”

Mike’s son Nolan also offered some heartfelt comments as well; he has also pursued a very successful career in aviation, and has a very bright future ahead.  We are working to obtain pictures of him offering those wonderful remarks. 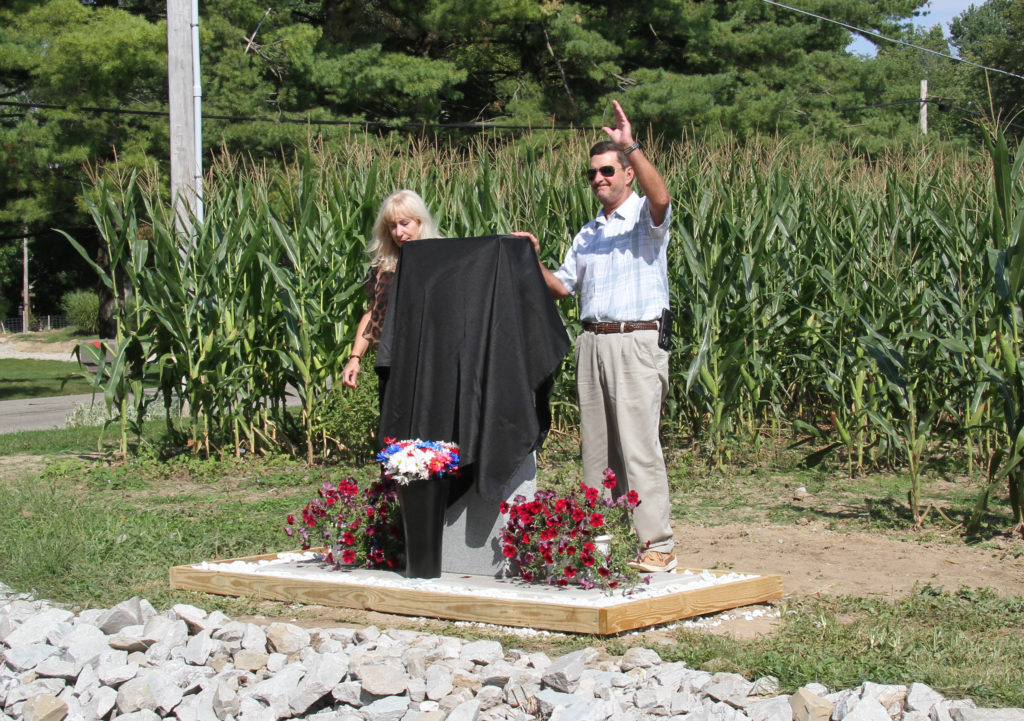 Captain Elrod’s other son John, about to unveil the monument.
John still lives in Indiana, and has a private pilot’s license.
He was instrumental in designing and working with the craftsmen to create the monument.
Nolan and John worked together very carefully on the wording.

Pictured with John is his sister Diane (daughter of Captain Elrod).  Continuing the tradition of aviation in the Elrod family, Diane worked as a flight attendant for Purdue Airlines prior to completing her education at Purdue University. 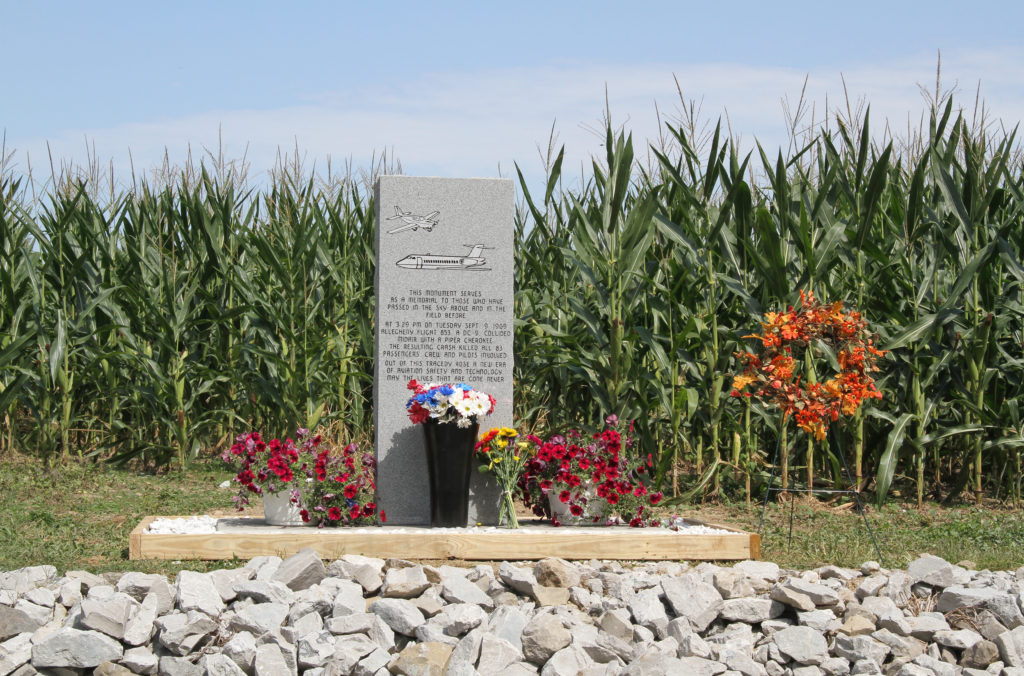 This monument serves
as a memorial to those who have
passed in the sky above and in the
field before.

At 3 29pm on Tuesday, Sept. 9, 1969
Allegheny flight 853, a DC-9, collided
midair with a Piper Cherokee.
The resulting crash killed all 83
passengers, crew and pilots involved.

Out of this tragedy rose a new era
of aviation safety and technology.
May the lives that are gone never
be forgotten. 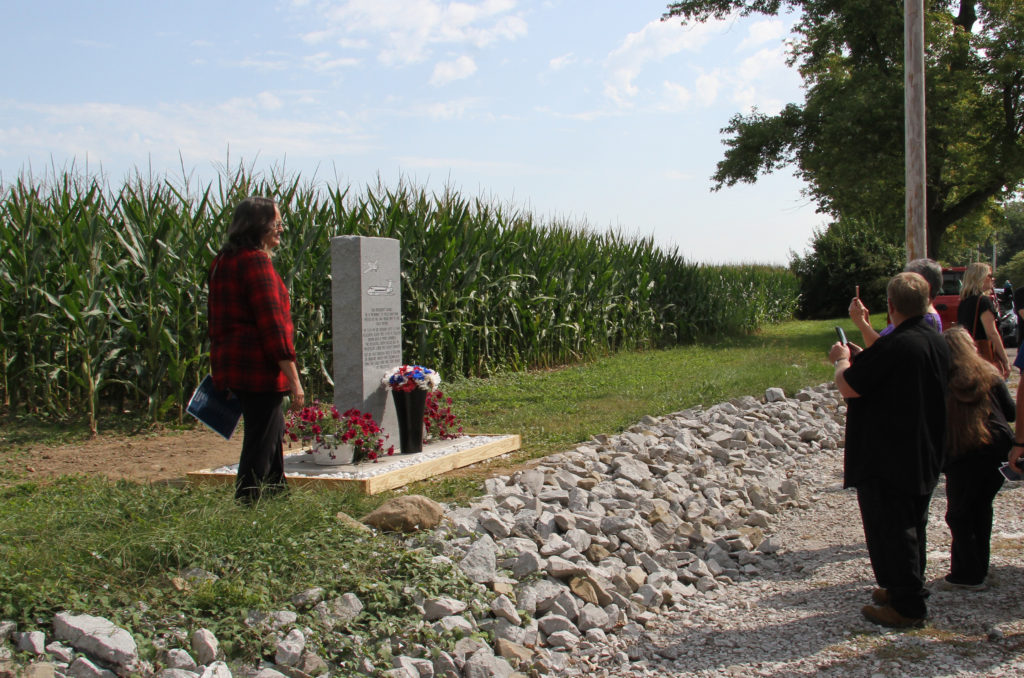 Family members being photographed with the monument.  For some, this was their first visit ever to the crash site.

From the Governor (who was on a previously-scheduled trip to Asia on the day of the service):

“Greetings.  I regret that I am unable to join you today for the memorial service to commemorate the 50th anniversary of the crash of Allegheny Airlines flight 853.  My prayers are with all of you on this day.

“On Sept 9, 1969, eighty-three of our brothers and sisters departed this Earth to rest in peace for eternity.  This tragedy has left an indelible mark on our community, along with the families and friends of the souls taken on that day.  The harrowing event still stays with us to this day, and we must always remember the men and women who were taken from us too soon.  The loved ones lost will remain forever in our hearts, and we dedicate this memorial to join those at Forest Hill Cemetery.  While this memorial can be a painful reminder of that day, it is a part of our history – and we now honor these men and women.

“May God bless those 83 souls, and may their memory remain with us forever.”

The Honorable Eric J. Holcomb,
Governor of the State of Indiana